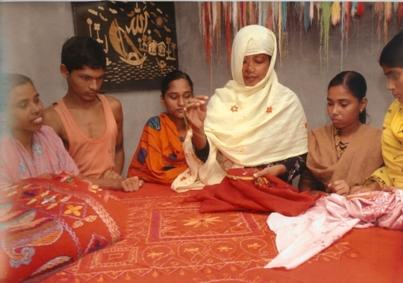 These lines are written by a self-motivated woman who did not stop even after being acid burnt. She is constantly struggling to make many disabled women self-sufficient. Her struggle started to save her soul after being burnt with acid.

In early 1996, at the age of only 14, Shamima, a student of class eight, had to marry a 35 year old man due to family pressure. According to her family, the bridegroom’s age was not a problem as he was a service holder. However, Shamima got frightened with her husband’s extreme sexual desire right from the wedding night and after terrible three days; she came back to her father’s home. She was again sent to in-law’s house, but yet again husband’s company made her scared. Shamima’s in-laws did not consider her mental condition; rather they teased her and said she might have affair. Shamima returned her home again. Rumors were spread in her native village too. In the middle of the tag of war between the two sides, Shamima’s husband threatened her of acid attack for revenge.

It was about 2 o’clock at night on 14 September 1996. Shamima was sleeping beside a window at her father’s house. Suddenly her whole face burnt like fire. After hearing her shouting, neighbors rushed towards her and caught her acid thrower husband red handed from a nearby symmetry. Initially Shamima was brought to Kotchandpur Hospital for instant treatment, and then transferred to Khulna Hospital after 1-hour treatment in Jhinaidah hospital. Her face, eyes, ears, nose, shoulder and hands were burnt with acid. It became more severe for not using water. She was brought home after 7-day treatment at Khulna. As her condition was getting worse day by day, her father somehow collected 80 thousand taka to send her to India for better treatment in 1997. After her return from 1-month’s treatment, she had serious infection in her body. It took much time to get well by local treatment.

Afterwards, Shamima started a new life. She got admitted in class nine and started receiving sewing training. She launched an organization named Oyikko Nari Kallyan Sangstha with 43 deprived women of her village, of whom 25 were physically disabled. They are given training for block, butik and sewing. These activities are carried out through their own society (Somiti). Shamima, president of this Jubo Unnayan Adhidapter affiliated organization, is continuing her studies at Open University side-by-side her official duties. A feature on Shamima’s success was published in Prothom Alo on 17 June 2005. Till then she did not know about ASF. Photographer Shafiqul Alam Kiron, who was with the acid survivors from the beginning, read the feature and went to Shamima’s house at Jhinaidah for publishing her photograph in British American Tobacco’s Calender. He advised her to go to ASF for treatment. After a long time, Shamima took treatment at ASF. Meanwhile she had two surgeries. More operation is needed.

Shamima’s family filed a case after the acid attack. The perpetrator has been sentenced to 43 years imprisonment. He is now at jail. Shamima wants to develop her organization as voluntary organization. She wants to show how to be a protestor and self-reliant to the acid burnts as well as physically disabled women who are left behind helplessly in the society. Shamima’s self-motivated life struggle is an enlightened example to hundreds of acid victim women.